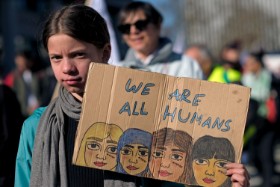 Introspection #15: A Message to Victims of Racism

I get it. The world is a tough place to be in, especially in a country like America where there is so much diversity that prejudice is unfortunately inevitable given our current human behavior. Yes, I believe that America is so fortunate to be filled with people from various backgrounds, enriching the nation with numerous compelling cultures and interconnecting the lifestyles of many through the innate sense of compassion that many of us yield.

But with this grand characteristic comes a great price. This price can only be overcome if everyone learns to love one another regardless of how different people seem from each other. Even though I yearn for our world to be like this, I painstakingly know that our instinctual behaviors, psychologically provoking internal alarm when faced with beings who possess features unlike ours, make this nearly impossible. The only way I feel like discrimination could be truly banished was if our world consisted of individuals who were all exactly the same, both internally and externally. Without any differences that could spark one’s bias, the world would finally live in harmony.

However, imagine how boring the world would be if that were to occur.

With that in mind, it troubles me to see individuals loathe their identity due to the pressures they have to endure just for being different from the rest. These pressures have caused upsetting behaviors, from Chinese-Americans hating their small eyes and longing for surgery to alter them to Indian-Americans embarrassed when eating their samosas in front of their European friends. I completely understand that they are fed up with the emotional anguish they constantly have to encounter due to their unique characteristics. I just wish that they would have the resilience to affirm that their distinct features make America, and the whole world, prosper. Our planet’s vigor is driven by our identities all combining to amass a glorious entity.

With the identities of individuals suppressed, many find themselves hating the world, for the Earth’s beauty is being corroded by the appalling bias that threatens to mask its value forever. As a Filipino-Chinese American, I have suffered from these feelings myself through forms of discrimination in the past. Initially, when they occurred, I was too young and naive to acknowledge the attacks on my background. These racial offenses included my eyes being ridiculed in Kindergarten, my sister being teased and called “Ching Chong” at Chuck E. Cheese, and a lady at the mall who wanted to have a conversation with us but decided against it since she assumed that we could not speak English. Similar to my naiveness when encountering those scenarios, perhaps a lot of what discrimination stems from is our own ignorance and inability to realize the truth.

Like many, I used to think that America was a wondrous place filled with opportunities. The exciting vast amount of resources within the nation could allow me to exploit my passions and dreams to new heights. America is a country blessed with many high-quality institutions, various jobs, democratic ideologies, and more. Wanting to take advantage of its deceivingly promising features, immigrants over the years have done whatever it took to enter America, some even desperately trying to cross the border through illegal means while risking their lives.  So many individuals have craved to fulfill the American dream.

And recently, a lot of us have woken up from it.

From the murder of George Floyd to the Asian-Pacific women attacks in San Francisco, many of us have come to accept that while America is filled with many treasures, it has not intended to share it with its newer, non-white inhabitants. The avarice of certain Americans has pushed them to take measures that seem so surreal, yet cannot be overlooked. Every killing, threat, mocking joke, job lay-off, and other discriminatory actions from those individuals fail to discern that its hopeful inhabitants from overseas make America special.

America should be proud to house such diversity. America should be proud to not accommodate only white, straight, and masculine people. But it seems like that is the way that America wants to be, given the amount of oppression toward others who desperately try to encourage people to shatter their toxic ideologies of a “perfect” America. Activists try so hard to compel America to change its ways, but the country is as stubborn as a piece of gum on the bottom of a shoe. So to my fellow non-white Americans who hate themselves for what makes them separate, please understand that you are not, and never were the problem. This country was raised through years of othering values that appraised the stereotypical white American for properly “educating” and “saving” foreigners from disorder, which is highlighted from Rudyard Kipling’s “White Man’s Burden” to Carolus Linnaeus’s Systema Naturae. For a while, demanders for progress were too shunned to express their outcry over these faulty beliefs.

And yet, one of America’s supposed “gifts” is our freedom of speech. Consequently, thanks to our advances, more are gaining access to this right to underline that the nation needs to change. I see the voices of angered Americans finally overtaking the media like a storm, no longer constricted by fears of abuse and instead motivated by their desire to help struggling minorities. Even though the pain of discrimination may be perpetual, that expectation should not in any way stop us from promoting awareness. Maybe I am being too pessimistic, and the world may be able to achieve complete harmony under the right conditions.  For now, though, we must keep normalizing an environment in which one’s bias toward certain human features does not compel them to harvest animosity among a large group through unjustifiable actions. Thus, use social media to accentuate the ongoing struggles of minorities within America. Organize a rally to publicize your cause. Email and call local politicians to emphasize how much you care about the issue. Black or white, straight or gay, man or woman: most of us are privileged enough to have inalienable rights. Unfortunately, some of those rights are suppressed for others due to the racists’ selfishness, leaving no room for others to enjoy their human freedoms to forge a “perfect” world from their malevolent perspective. Therefore, our freedom of speech is not just a tool for lending our own voices to bring about change. It empowers the discriminated against with a voice as well, and we must do whatever we can to protect them from further aggression.

My favorite word is “spectrum.” The word reflects the complexity that makes humanity beautiful. Over time, many of us have realized that we are so much more than “boy” or “girl,” “sporty” or “artsy,” “tall” or “short,” “black” or “white,” “smart” or “dumb,” etc.  The world is meant to be a masterpiece, radiating from the gorgeous array of colors and mediums that all of us have to graciously offer. No one color nor medium can exactly be the same between people. Discrimination seeks to deteriorate our glamorous canvas, but we must not let it tear down our pride for what makes our spirits shine.

At the same time, I feel like, despite all our differences, there will always be certain qualities that make us all the same. From empathy to compassion to awareness, while many dishearteningly conceal these unifying characteristics, nevertheless they make us all human. People who try to distance themselves from what flows them with humanness are the ones that disrupt the harmony of our species. So while it is important to recognize the grace in our differences, perhaps humanity also needs to humble themselves and accept that we are all just human beings who deserve to feel known.

We all must do our best to force the world to finally recognize the preciousness in the uniqueness of our spirits and the humanness that all of us share, questioning the actions of those who believe they are “superior” or even “inferior” to others. Bias must not break us. We cannot let people continue dragging humanity down.

We are too spectacularly distinctly homogeneous to forever fade.