A Message Everyone Needs to Hear: You are Not Alone 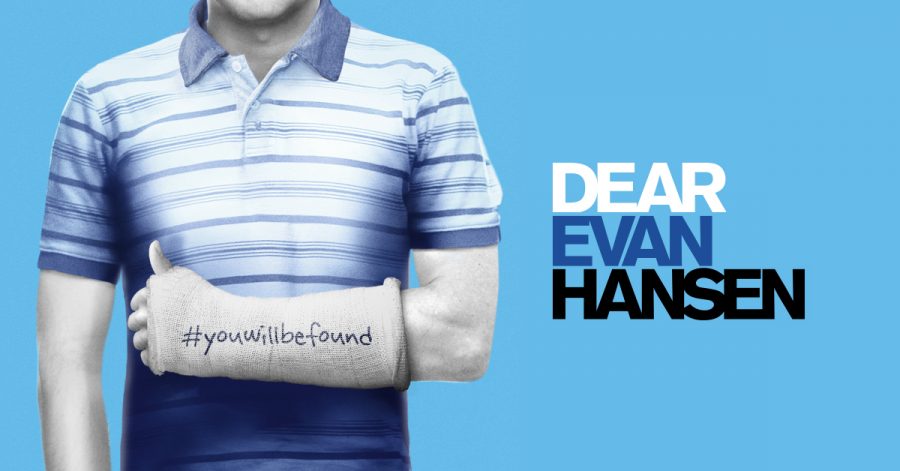 Suffering from severe social anxiety, Evan keeps to himself, too busy in his overactive thoughts thinking about his sweaty palms or what to say when ordering takeout or his crush, Zoe Murphy.

Assigned by his therapist to write letters to himself, Dear Evan Hansen is a constant reminder that he is not like everyone else. He doesn’t go to parties with his girlfriend (he’s too scared to ask the girl of his dreams out), he doesn’t get high with his friends (not that he has any), he can’t even have a conversation with his mom that’s rarely home.

Stuck with his thoughts, Evan spirals. Alone and with no way to communicate with others, Evan develops severe feelings of loneliness and feels he is becoming a social outcast. But what Evan doesn’t realize is that he’s not alone in the way he feels.

Debuted in 2015, Dear Evan Hansen sends a message to young adults all over that they are not alone.

Mental illness has always been an avoided conversation in America. Overlooked as teen angst, attention-seeking, saying other people have it worse, or telling someone it’s simply just not real. Despite that, the release of Dear Evan Hansen has made the conversation a bit more open.

As seen in the musical and book, the use of social media is a huge help to spread awareness of the suicide of Connor Murphy. And the awareness did not end in the musical. Multiple interviews, articles, and performances were held after the debut and growing popularity of the musical.

Dear Evan Hansen helped build a safe place for teens across the country. A place where teens could realize that nothing was wrong with them and that they were worth something.

You Will Be Found and Disappear helps relay this message of belonging and worth. “Even when the dark comes crashing through. When you need a friend to carry you. And when you’re broken on the ground. You will be found.” (You Will Be Found) “No one should flicker out or have any doubt that it matters that they are here. No one deserves to disappear.” (Disappear)

Not only does You Will Be Found and Disappear pass on this message, but it also allows listeners to relate to it on such a personal level. “The message is important to me. It shows me that no matter how bad it is, someone will always be able to help.” These songs do exactly what they are supposed to do, allow teens and young adults to see the importance in themselves, the worth that they believed wasn’t there.

Another song from the groundbreaking musical is Words Fail. This is the point where Evan breaks down. The world that he created out of lies cave around him and he has to face the one thing he doesn’t want to face: himself. He has to own up to his mistruths and face those he hurt dearly, along with himself.

He sings “So I just stand here sorry, searching for something to say. Something to say. Words fail, words fail. There’s nothing I can say.” This is such a raw and emotional moment in the musical. Evan, by himself finally confronting all these feelings that he had been holding in. The façade that he had put up for everyone slowly falling, until there is only him, staring at himself and accepting himself for who he is, mental illness and all. “No, I’d rather pretend I’m something better than these broken parts. Pretend I’m something other than this mess that I am. ‘Cause then I don’t have to look at it and no one gets to look at it. No, no one can really see… I never let them see the worst of me.”

Words Fail also allow for listeners to relate. It’s that moment that anyone who suffers from a mental illness has. That moment where they have to look at themselves in the mirror and cry or scream or both. They have to look at themselves and put down whatever façade they were wearing, big or small, and discover themselves again. “It’s that low point that I’ve had. And at that moment words can’t express the feelings that I’m feeling or the thoughts. It strips you, makes you vulnerable.” Although it is a heartbreaking moment, it also gives hope. It gives you the feeling that ‘someone else is suffering just like I am, and they’ve come out stronger than before. So I can do it too.’

This musical goes through a great range of emotions, good and bad. It helps us peek into the mind and life of someone and helps us understand. It opens the eyes of people around us and ourselves and makes us want to check in on our friends and family, but also ourselves. It’s a musical about hope, heartbreak, betrayal, and regret. But that is something that we all experience.

This musical can be taken in many ways, but I hope it continues to transform the lives of people young and old suffering from mental illness.

Today is going to be a good day. And here’s why: because today at least you’re you and… that’s enough.